An Urban Ethnography of Latino Street:Gangs in Los Angeles and Ventura Counties, Chapter 4: The Sites–Dysfunctional Neighborhoods 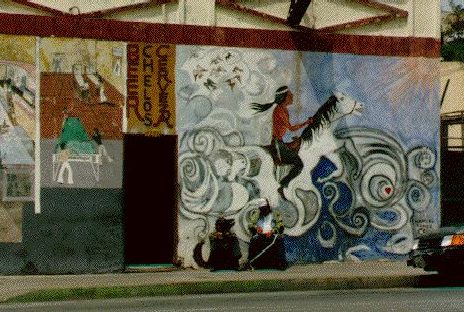 In this sample, the sites included the East Los Angeles projects along Lancaster street, De Soto, Hazard Park and general vicinity; Boyle Heights, Lincoln Heights, El Monte, the Pacoima projects near MacClay Middle School and general vicinity extending to San Fernando, Van Nuys, North Hollywood and Sunland in the San Fernando Valley of L. A. County. Also included in the sample was the Colonia section of Oxnard in Ventura County.

The sites all have in common definite manifestations: the ear marks of a lower socio-economic area, characterized by unemployment, widespread deterioration, poverty, high crime rate, gang graffiti and violence. These communities in themselves provide virtually no opportunities. For most barrio youths, “Life chances are severely limited to the point of being virtually non existent.” (Hallcom 1993)

Consequently, many youths (and adult men in particular) simply “hang out” –an expression defined here as milling around on the streets, gathering at friends’ houses with stereos blasting, cruising in cars, loitering at street corners or in front of buildings, and lying around in near-by parks drinking beer.

Many young people have been thrown out of their homes by well meaning parents who having grown frustrated with the transgressor’s activities have literally kicked their son or daughter out of the house. Of course, inherent in this imprudent and rash disciplinary measure is the fact that these errant off spring are now cast out to become the problem of the community.

Such exiles often find refuge with aunts, grandmothers, or adult cousins, older siblings (extended family members) who live in separate residences from the parents. Others temporarily live with friends and to some extent on the streets as well. It is not uncommon for a youngster to live with a friend’s family for months at a time perhaps extending into years. In Mexican culture, families frequently rear someone else’s child in addition to their own — a cousin, friend, etc. “Se crio con nosotros,” is a common expression, meaning, “We raised him/her.”

Others outcasts live in a converted garage, or even a tool shed of a friend’s family, and sometimes of their own parents who will not have them set foot in the house any longer. The tool shed/garage dwelling accommodates the outcast’s odd hours without impinging on those of parents and siblings who get up early to go to work and school.

Children who live in perpetual poverty are traumatized (Wilson l987) (Vigil 1988)(Bassuk, Browne and Buckner 1996), and even as adults they frequently suffer from posttraumatic stress syndrome (Guevarra 1992). In these neighborhoods, victims of violence also suffer from posttraumatic stress disorder or from some other form of anxiety, fear, and emotional difficulty–sleeplessness, nervousness, confusion, grief, anger, and even rage. Unfortunately, in most cities in the United States today approximately 15% of the citizens are living below the federal poverty level, defined as $12,156 for a family of three in 1995.
“Twenty-three percent of the children in the U. S. live in poverty; no other industrial nation comes close to this figure.” (Bassuk, Browne, and Buckner 1996:66)

Children surrounded by racial segregation, indigence, and poverty have an inordinately narrow passageway to mainstream accomplishments or jobs and success. The gang often understands the individual’s pain and hopelessness far better than any family member or social worker ever could.

These kinds of neighborhoods yield obscenely high drop out rates as a result. For Hispanic youths the drop-out figures fluctuate around 50% and higher varying from school to school, lower in junior high or middle school, and rising starkly by 10th grade.

Pride in community has been shrouded with litter and graffiti. But for a few murals on the sides of buildings and the rose bushes blooming wistfully by apartment doors, beauty is lacking in the surroundings as well as in the lives of children who grow up here.

Having no spending money is a chronic condition. Many youngsters have no opportunities and often no dreams or ambitions, because plans of any kind are merely fertile ground for disappointment.

Teacher tête-à-têtes revealed their surprise to find many youths who had absolutely no ambition, no dreams, who did not care about anything at all–not even whether they lived or died.

Many members of the extended family and parents themselves reported a desire to move away from the area, but most were financially trapped in a city where rents are exorbitant and moving costs are prohibitive. Others work two jobs and long hours, but their unskilled labor produces extremely low wages.

A good many single-mother-headed-households were on Aid to Families with Dependent Children, but many of these women on welfare had worked at some time. They also said they would like to get a good job and earn a living, but most have few or no skills and live in extremely shaky financial conditions. Some make so little money when they are employed that their living circumstances whether on or off welfare remain essentially the same. The incidence of physical, sexual and psychological abuse among these women is reportedly quite high (Bassuk, Browne, and Buckner 1996). Many Latina single mothers in the current study, according to their own reports, went from one abusive relationship to another, thereby rearing their children in very unhealthy households.

In these neighborhoods, as the more stable working families move away, they leave behind a lack of role models for children who do not necessarily have good examples at home. The more stable working families move away to better their own conditions and to remove their children from the gang environment. In their absence, the neighborhood is left with nothing but unhealthy norms and no sanctions against aberrant behavior. Other studies concur (Wilson 87)(Hallcom 93).

Neighborhood identification is cherished only by gangs involved in turf wars (Hallcom 1993). They fight and die over a few blocks of barrio ghetto–the cheapest and most undesirable real estate in the city–on which they are more often than not, only renters and not even owners.

Criminologists and sociologists have unquestionably confirmed that the prevailing epidemic of gang violence in L. A.–more than a death a day–is rooted in “…neoclassical economic behavior, except that the hand that clears the market now holds an Uzi.” (Davis:13)